A reader wrote in today to ask about our experiences with our Smittybilt awning.

“I found your website through expedition portal researching the Smittybilt tent and awning. The tent seems to be well received by most who purchase it, but what about the awning? Hows the structure and material? Have you compared it to other brands?”

Well, he’s right about the rooftop tent. Our Smittybilt 2783 has certainly served us well and we’re always looking forward to spending another night in it.

Our side awning is a Smittybilt 2784, which has been an invaluable piece of kit. We have enjoyed many days and nights under it, sheltering us from the the sun and rain, covering our cooking from falling leaves or snow, or just giving us a shady place to read or relax in a hammock. 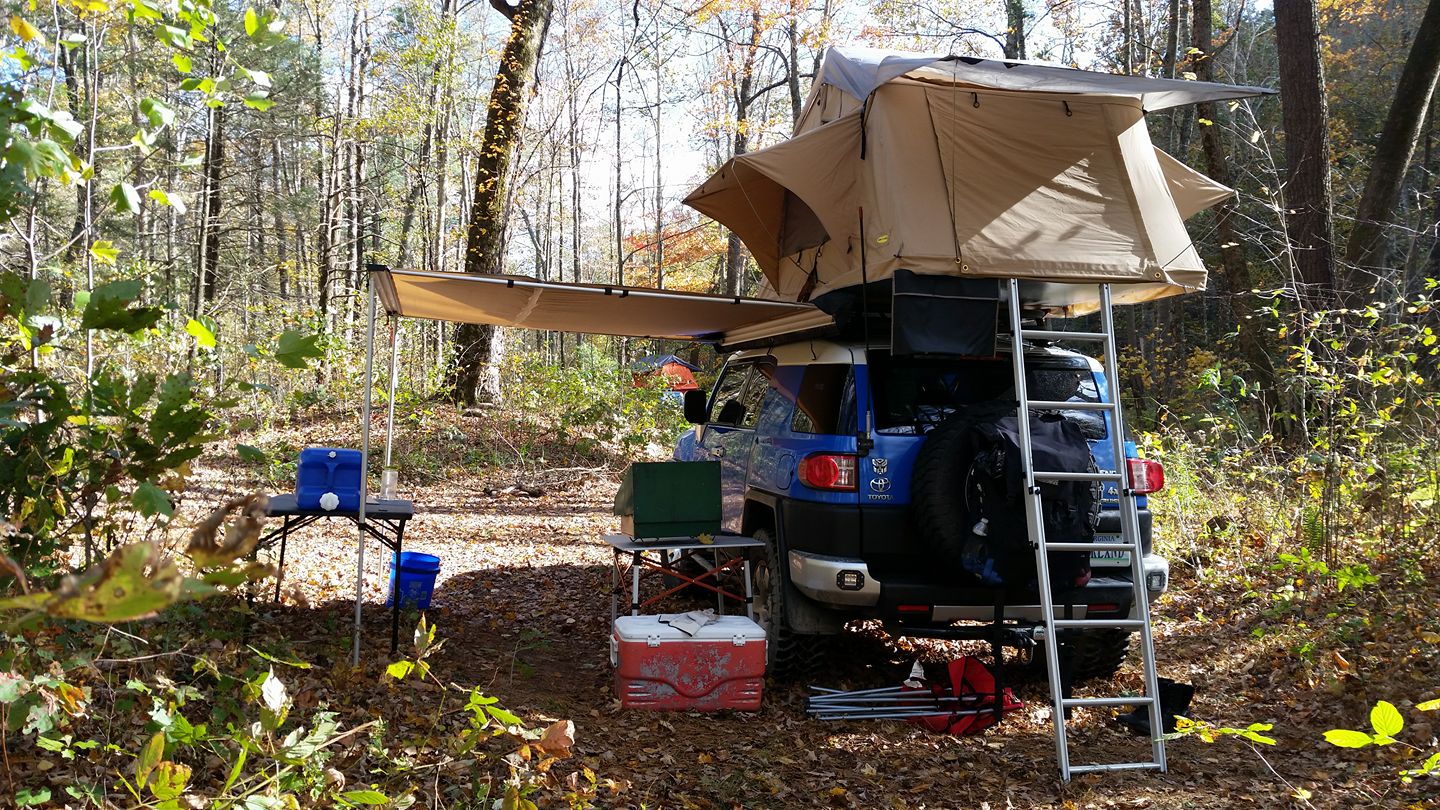 The Smittybilt is the larger of our two awnings, at roughly 8’6″ wide and 6’6″ long.  Originally placed on the driver side, we found that the awning provided significantly more shade on the passenger side when were backed up to the shore, as is the norm in the Outer Banks.  The following photos were taken about a year apart, but at roughly the same time of year and same time of day.  The longer shadow clearly speaks for itself.

As we’ve mentioned before, prior to the FJ, we had a Jeep Cherokee. One of the only things we’ve missed from the XJ was the rear hatch. In seconds it provided both protection from the elements and access to the rear cargo area from any angle. 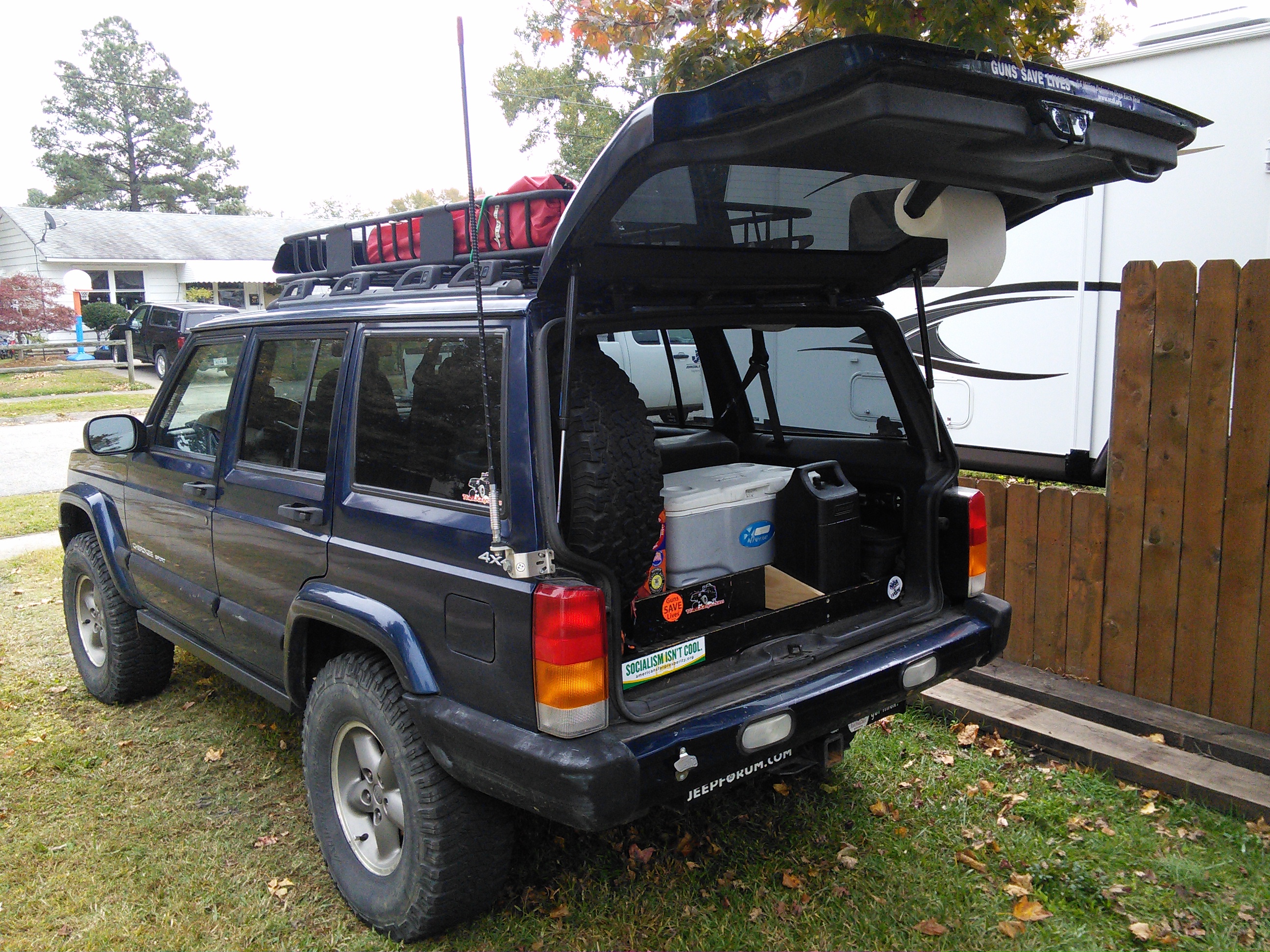 The FJ, instead, has a rear door. That certainly has its own benefits, but immediate shelter isn’t one of them. We decided to add a smaller awning to rear to take the place of the absent hatch. Smittybilt didn’t offer an awning in this size, so we went with an ARB 814301. It is approximately 4’6″ x 6’6″, so it certainly provides more cover than a rear hatch would, although it takes slightly longer to deploy. 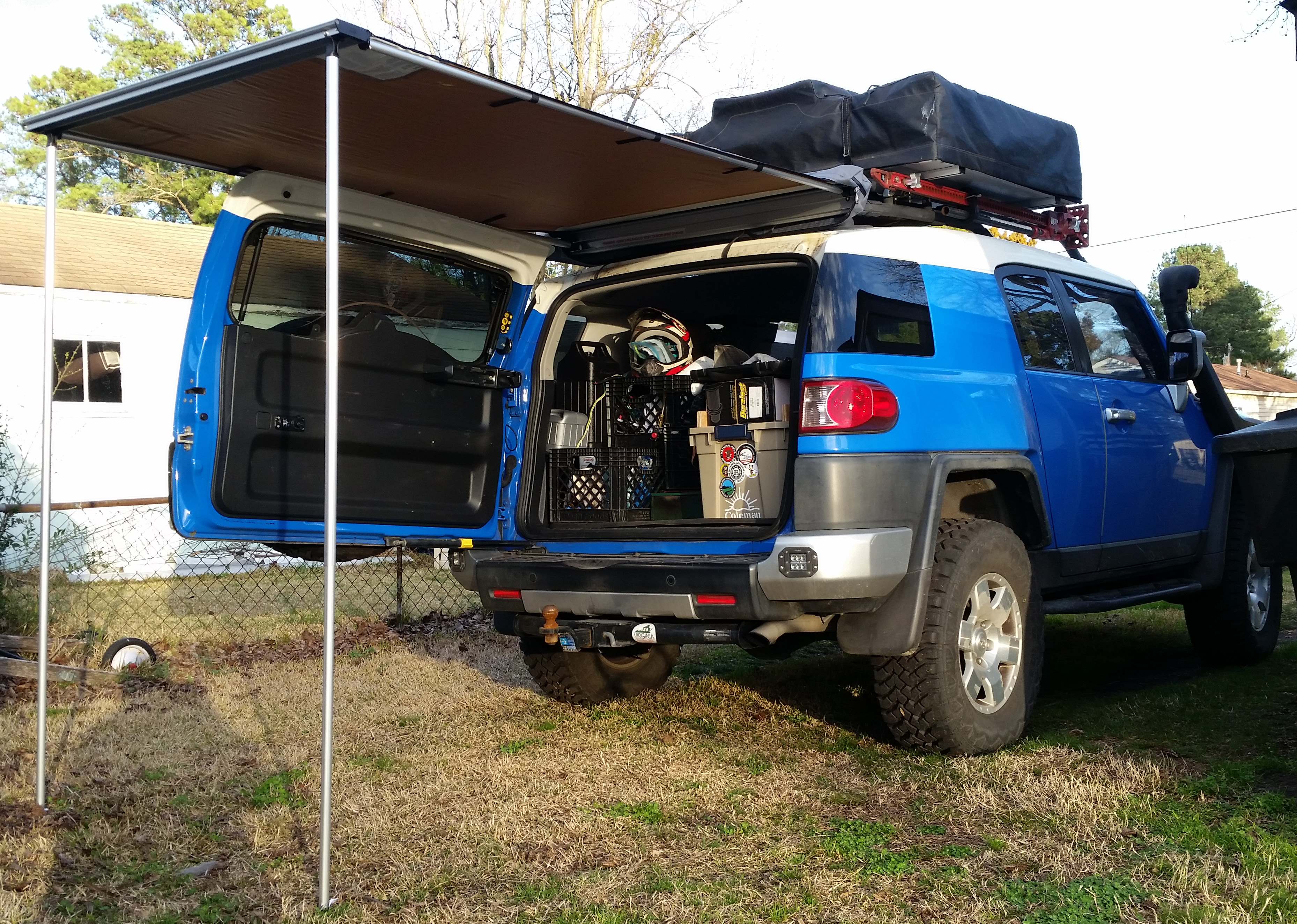 Last fall, when cleaning the covers and treating the fabric, we took the time to snap a few photos and record some differences between the two awnings.  So what did we find?

The first thing we noted was the material the joints are made of.  The ARB uses plastic, while the Smittybilt is metal.  So far there has been no difference in durability, but I’d certainly trust the metal to be stronger, especially in cold temperatures.

Also of note is the seams on the covers.  After washing and rinsing both awnings, the ARB was quite wet where water had penetrated the stitching.  We noticed daylight was visible through some of the needle holes.  The Smittybilt cover is taped on the inside over the seams.  This appears to substantially prevent water intrusion.  The amount of water pressure present from a spray nozzle is much higher than nature itself is likely to provide, and the ARB has never been damp when we’ve opened it.  If one was concerned, it could be better sealed easily with some Seam Grip or other sealer. 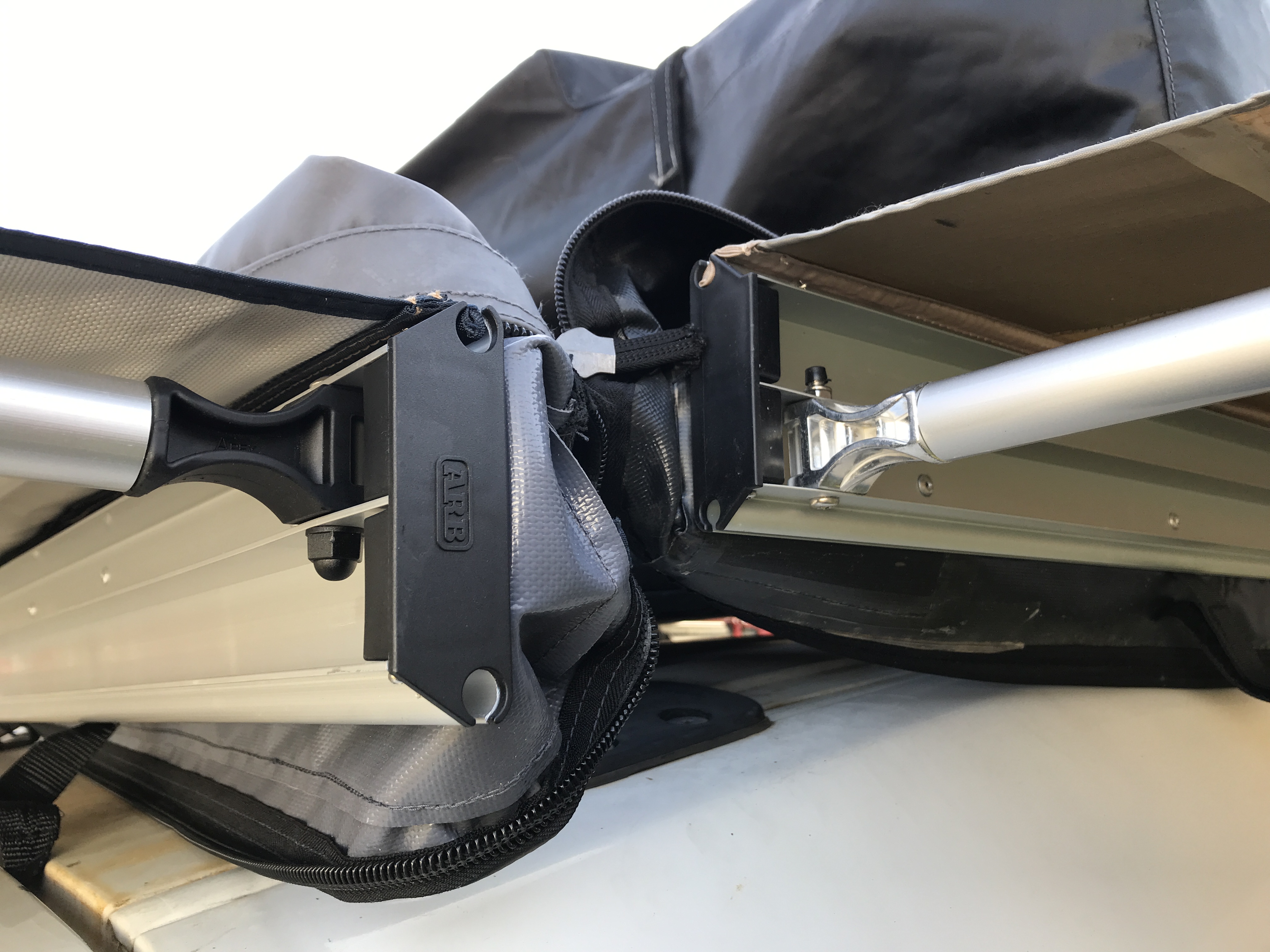 The next point is of minor consequence, but the engineering is a bit confusing.  On the Smittybilt, the pins at the end of the poles, both horizontal and vertical, are about 3 times as long as those on the ARB.  The outer channel on the Smittybilt is drilled all the way through to provide two holes for the pins to rest in, plus a third for a length of cord that allows you to stake the awning down.  The ARB is only drilled through two of the 3 channel fins, but the pole pins are only long enough to make it through the first hole.  The application of rotational pressure to the horizontal pins would be undesirable for any awning, but one would suspect that the single fin on the ARB would be more susceptible to damage at that point. 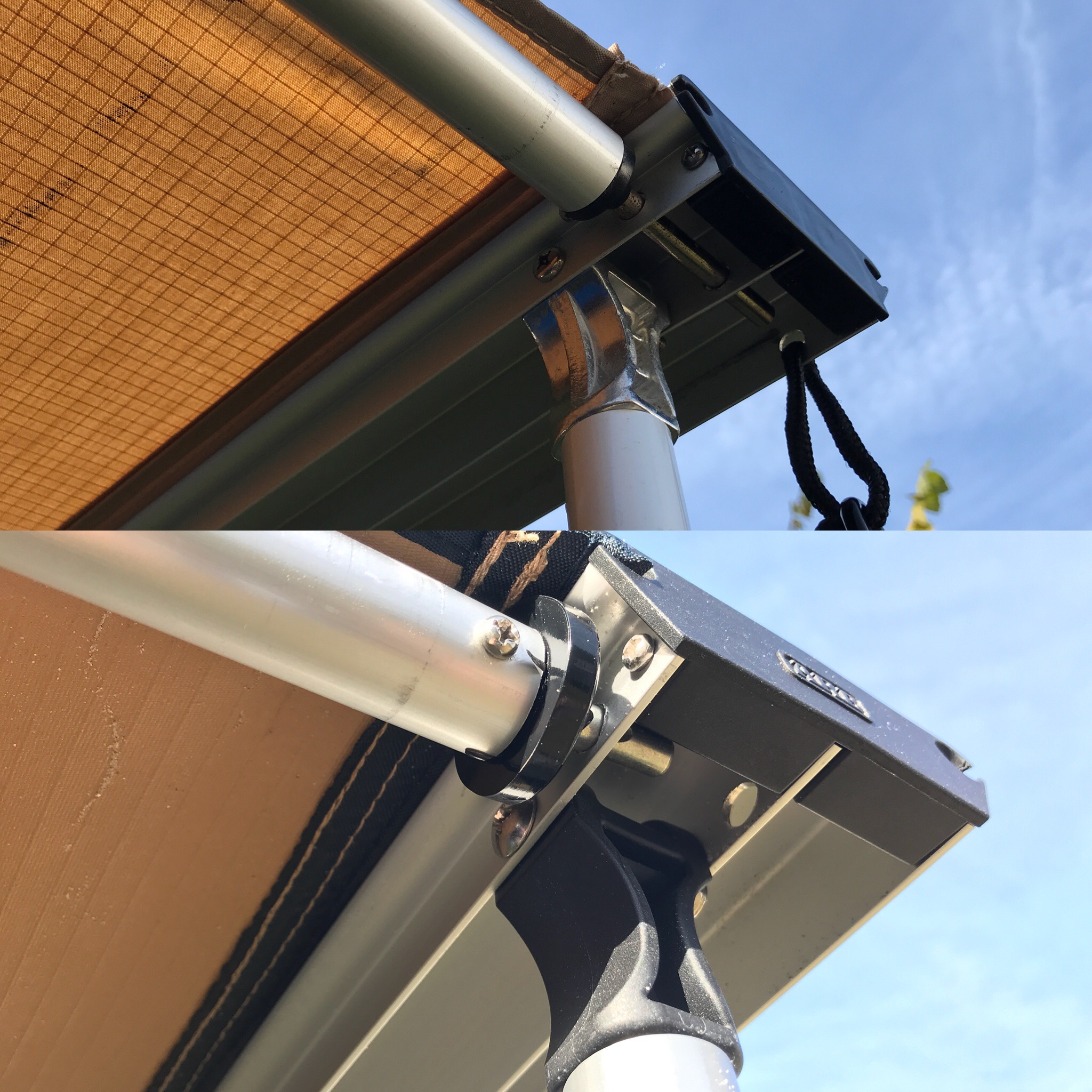 Another peculiarity of the ARB awning is what appears to be anti-abrasion pads at the front corners.  These pads and the rest of the fabric seem to be dissimilar materials and it appears that some of the coating from the primary fabric has stuck to these pads.  Does it matter?  Probably not.  Does it seem odd though?  Certainly. 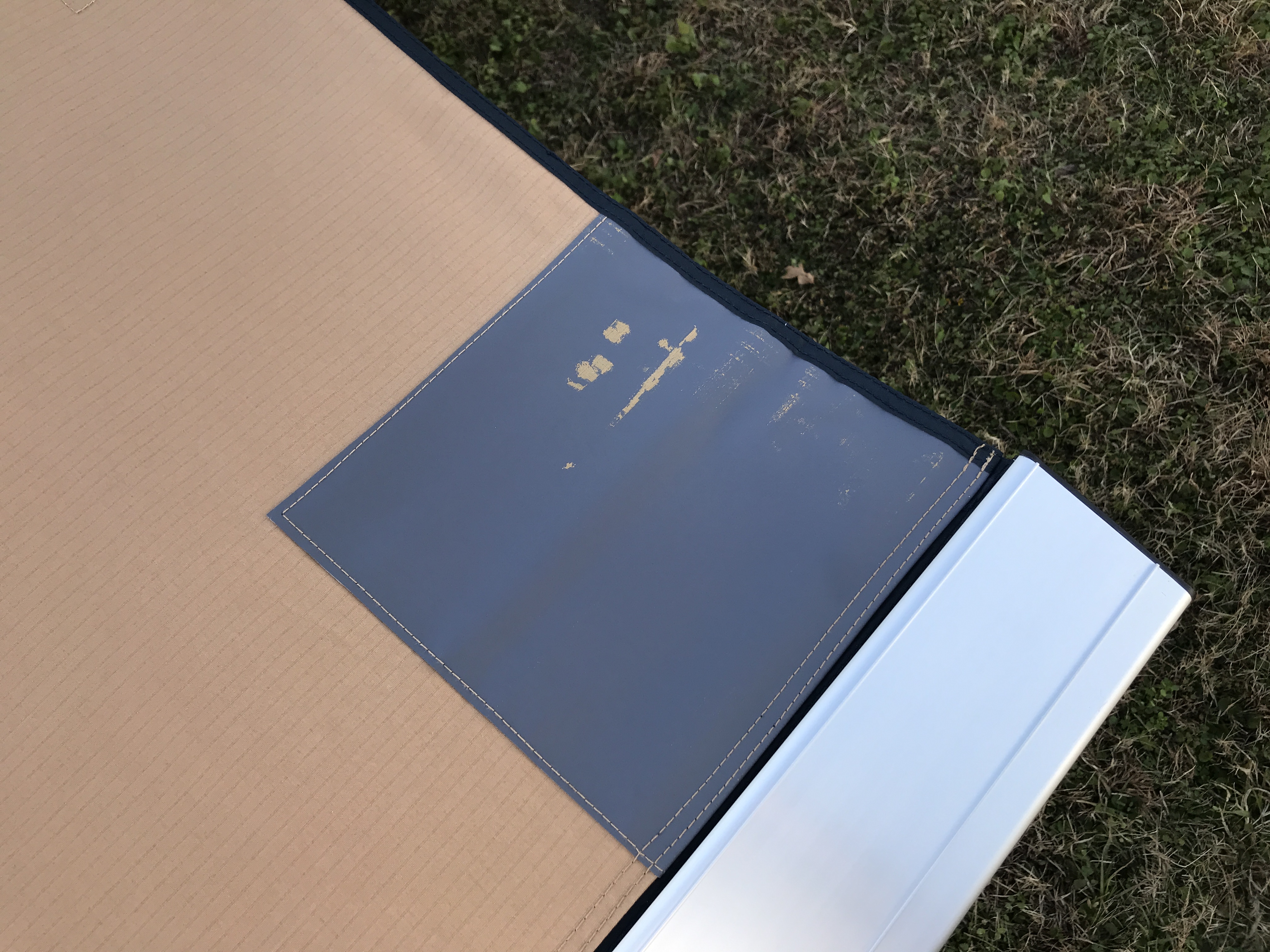 Lastly is a final point of value.  However simplistic, the Smittybilt awning did come with some basic mounting hardware, including L-brackets, u-bolts, and examples of how to mount it to roof racks, baskets, etc.  We purchased the Smittybilt awning prior to the rooftop tent and originally had it secured via clamp-style awning mounts.  After adding the tent, we needed to locate the awning a bit lower to clear the tent base.  The brackets included with the awning worked perfectly. 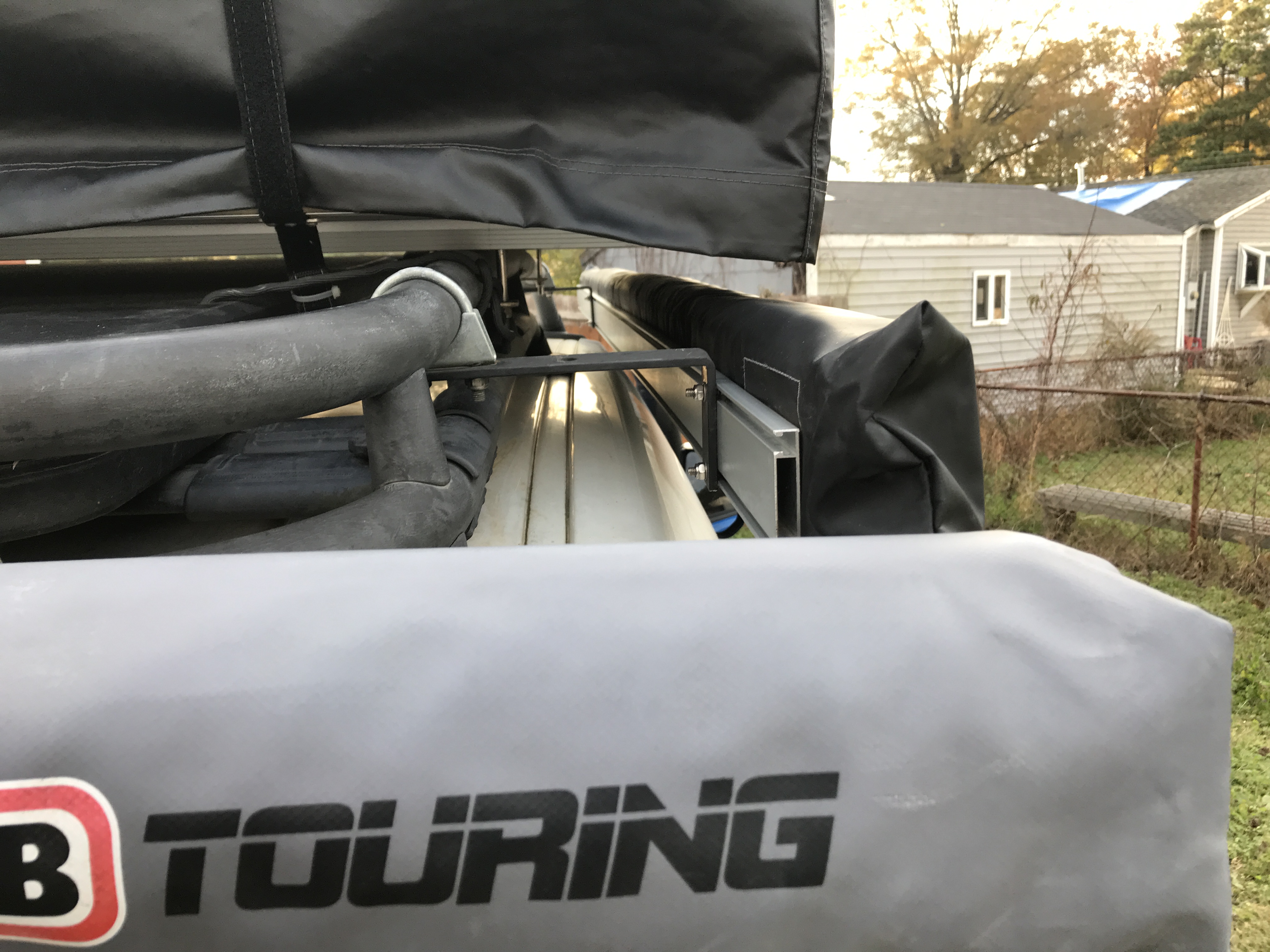 The ARB awning came with the nuts and bolts that are compatible with most mounts, but that was it.  It was nice to again have a use for the excellent Fourtreks modular awning mounts we’d originally used on the larger awning. 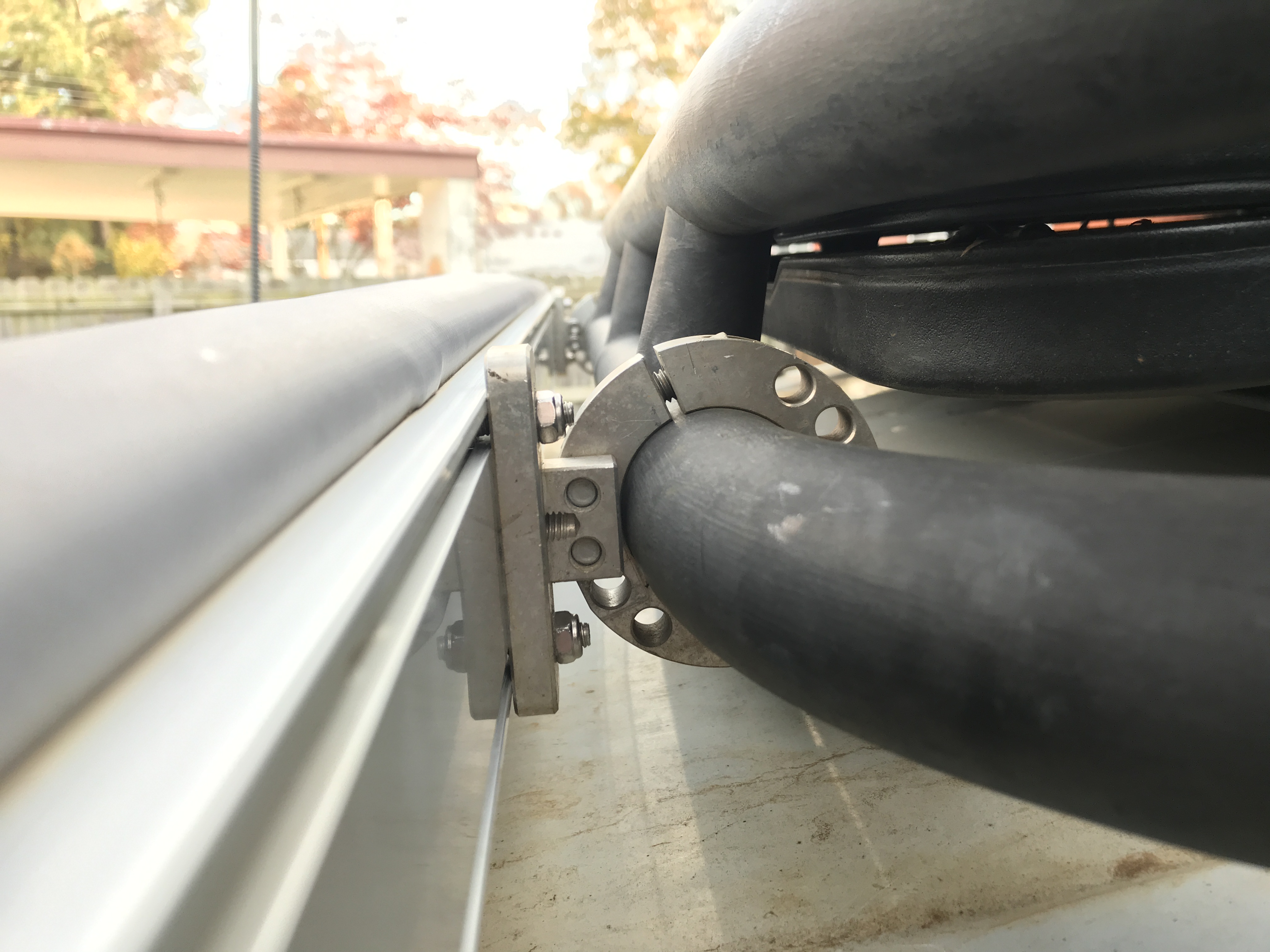 Maintenance on both awnings has been minor.  Twice a year we’ve scrubbed the covers clean with soap and water, then treated them with 303 Aerospace Protectant to minimize UV damage.  The awning fabrics have always kept us perfectly dry, but we’ve still given them a quick once-over with Scotchguard Heavy Duty to help with water repellency.

The Smittybilt has gotten far more use because of its size, mounting location, and now starting its fourth year of being on our rig.  We may look into a Foxwing in the future, but right now we’re quite content with what we’ve got. Despite the handful of negative points concerning the ARB, both awnings have been completely reliable, and you can expect an awning from either manufacturer will give you many years of trouble-free use. 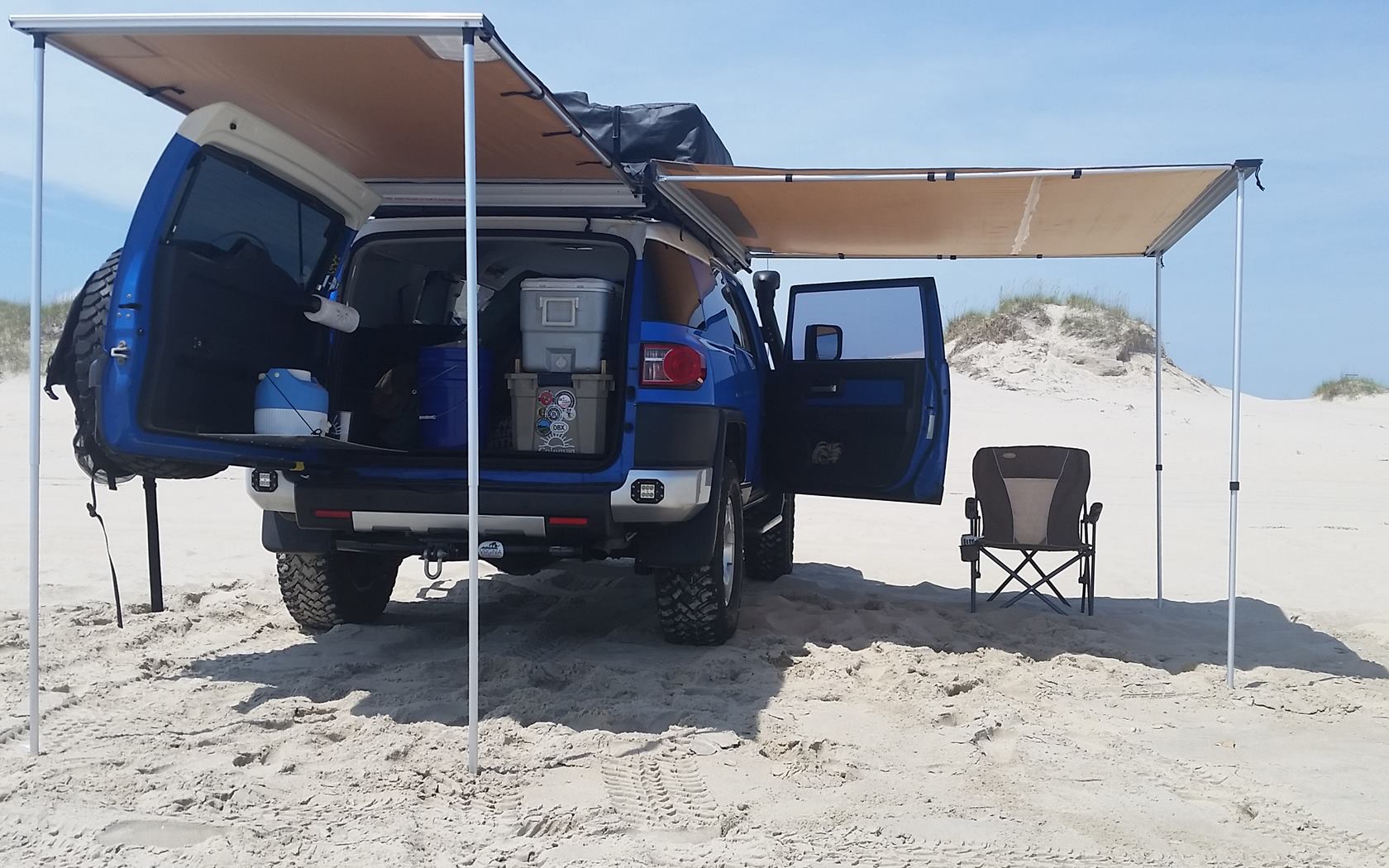 2 thoughts on “Comparing Awnings from Smittybilt and ARB”