Spending a few days on the trail is always such a kick in the pants.  You realize how little you need there, how easy it should be to get away, and how great it is for you to leave work and stress behind for a while.  That last part is always good at keeping its hooks in me, and I haven’t been in the woods since last fall.

I’m learning that I have to keep exploring, riding trails, and relaxing in camp as a priority – on par with the rest of my life’s responsibilities.  I owe it to myself to ensure I have the opportunity to decompress and enjoy the activities I love most.  Initially I was focused on my disappointment at how long it had been since I’d found the time to get away.  But in starting this article, I realized I’ve not stopped working toward that goal.

Sometimes it’s the little victories.  In this case, it’s some upgraded gear and some serious rig maintenance.  A better camera.  Some new tires.  Some additional hardware to carry 11 lbs of propane for cooking, light, warmth, and hot water.  A new refrigerator.  New wheel bearings.  Fresh filters on everything.  A much-improved tire repair kit.  A couple additional sockets and wrenches, should trail repairs be necessary.  I am very pleased to stumbled across the perspective to view these things for the accomplishments they are.

Enough mushy stuff.  Let’s talk about the trip!  There’s a place on 64 West, shortly before exit 121, where the center row of trees thins out to grass just as you crest a hill.  On the horizon before you, you see the topography become immediately more interesting.  Being a flatlander from the coast, this is a sight I always look forward to. 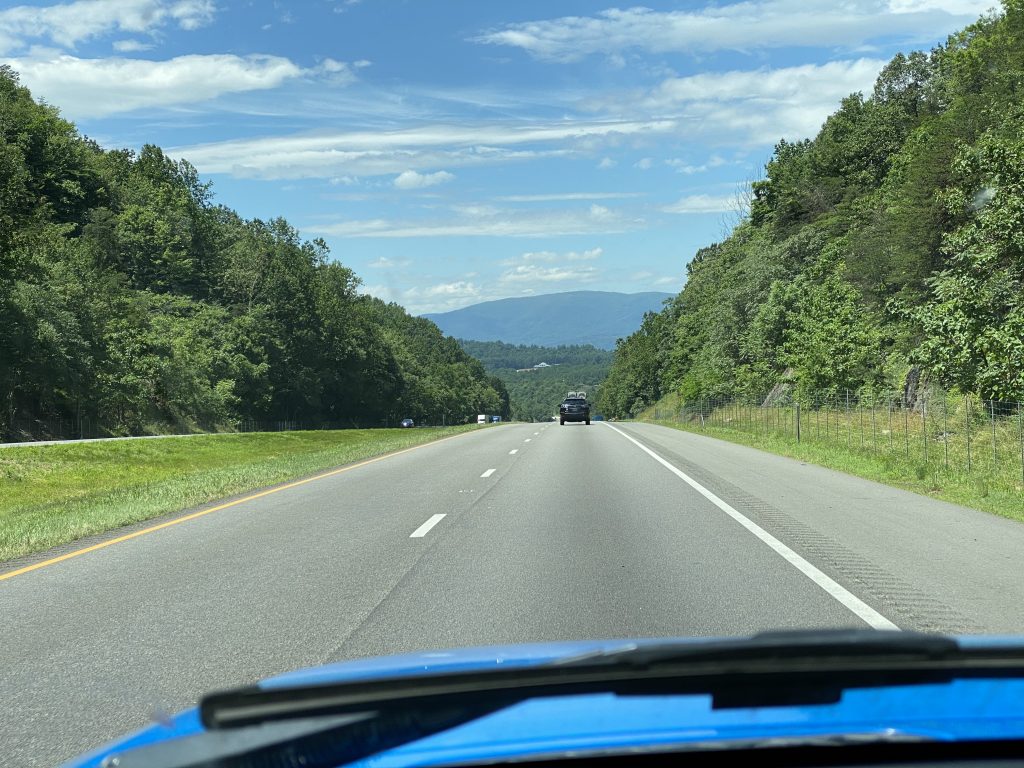 I was just a few hours ahead of my buddy Allen, so I had some time to kill.  I’d marked a few seasonal gates I’d spotted on my collection of maps, and cruised past some of those to see what I might find.  This day there was nothing nice for camping or any further exploration, but I got to see some pretty back roads. 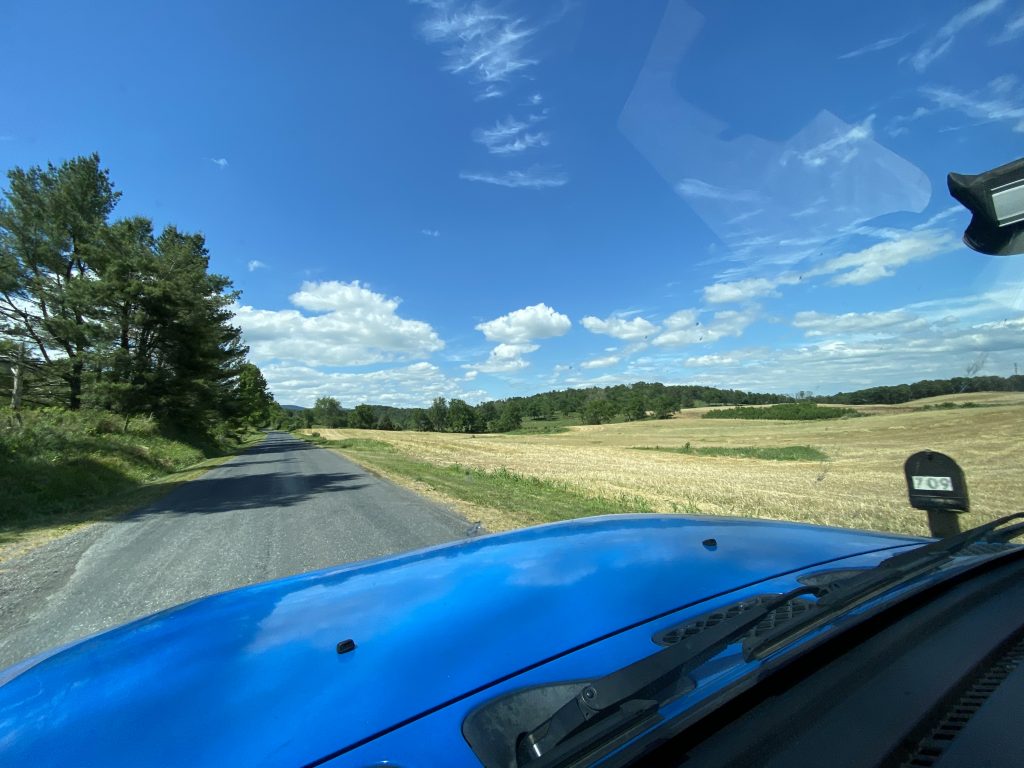 Finally heading in my intended direction, I did pause for the sort of vanity shot you see from most visitors. 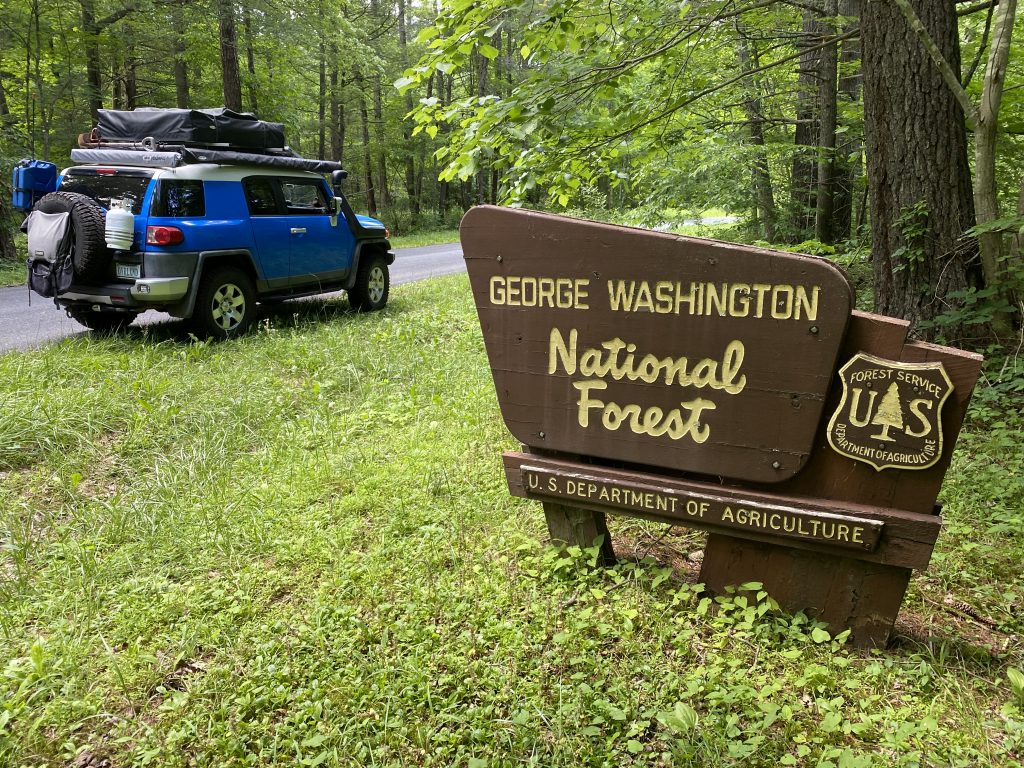 There’s a number of camp sites in the area I was entering.  We’ve seen them all on this particular stretch, but have 3 we prefer, depending on group size and conditions.  After checking out what sites might be free, I pulled into one of our usual spots that had grown quite muddy over the last couple of years.  I was pleasantly surprised to find a load of gravel spread over the worst of the mud! 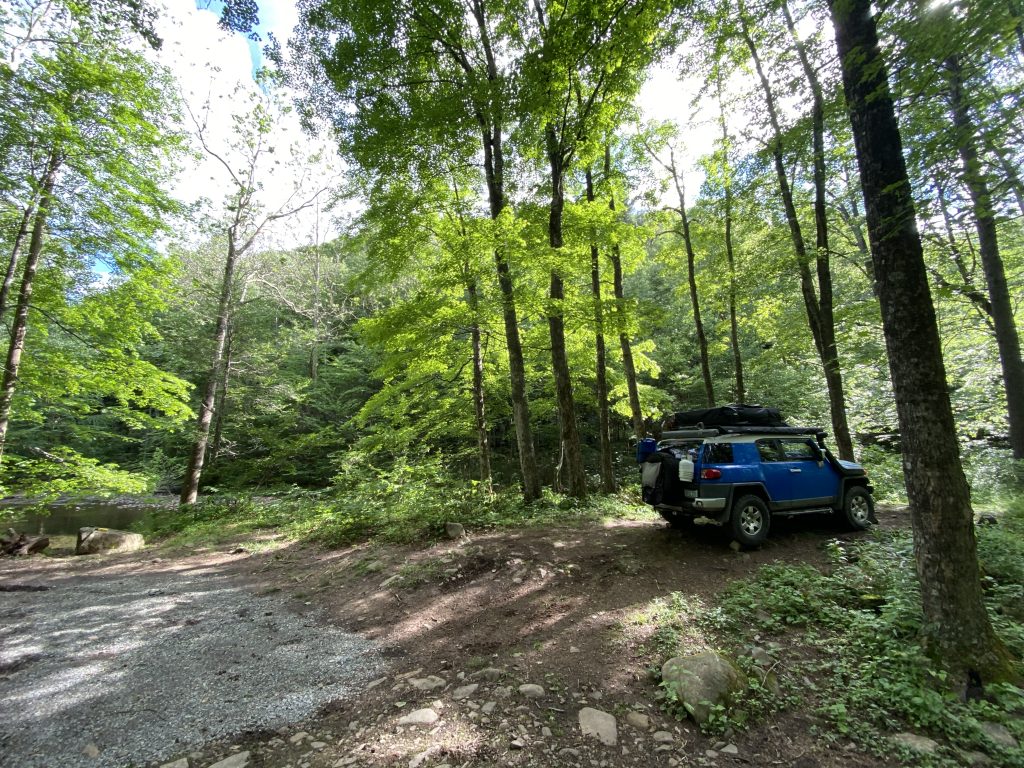 I proceeded to select my spot and level the FJ out, but decided to wait for Allen to show up before I really settled in.  Too often I get ahead of myself and by the time he shows up, I’ve already eaten, had a beer, burned half the firewood, and gotten sleepy.  I didn’t want to make the same mistake this time, although I think we both crashed about 10:30 pm.  Instead, I setup my chair to watch the river, and checked in with my wife via the inReach.

After sitting back and swatting bugs a while, I put on a long-sleeve shirt, treated my hat with some Permethrin, grabbed my walking stick, and strolled the river for a bit.  To say that I’m loving the new camera would be a massive understatement. 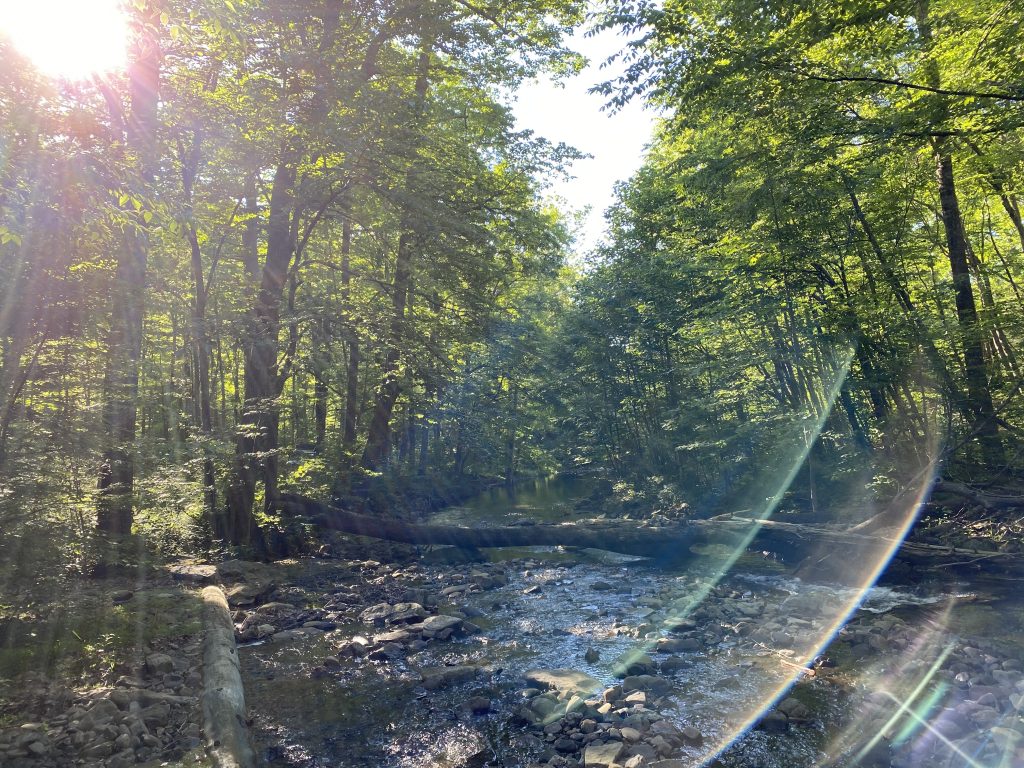 I recently bought a nice Covercraft sun screen and wondered what things would be like with the rest of the glass covered.  A trip to my local Lowe’s yielded a roll of Reflectix, from which I cut privacy panels for the rest of the windows.  They also do a good job of dropping the interior temps, helping the refrigerator out a bit during these warmer months.  They’re a little bulky, but they weigh nothing – basically just a layer of bubble wrap between two layers of Mylar.

With them installed, it’s nice to know that nobody can peek in on me while I’m sleeping.  It’s definitely not an issue out there in the woods, but could definitely be handy if forced to stop somewhere with more people.  Another plus is that they basically make a cave out of the cabin, significantly limiting the amount of light that can enter at any given time.  I’ll do a full write-up on them if anyone is interested.

Despite traveling with the rooftop tent, I wanted to try something different this time.  It probably doesn’t look comfortable, but I slept like a baby this entire trip in the passenger seat. 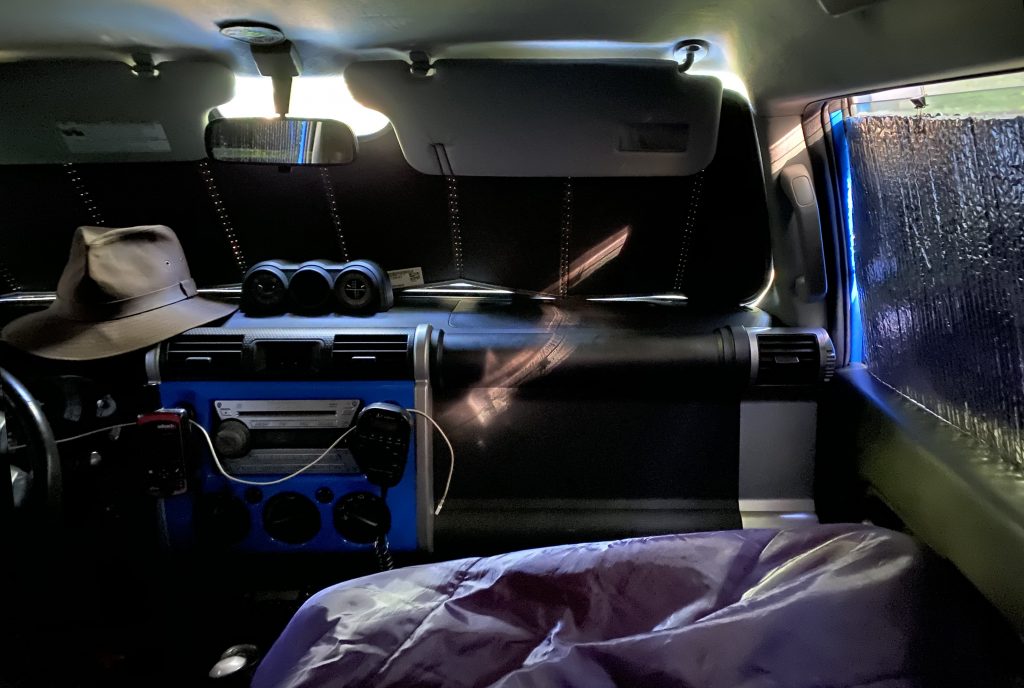 The next morning was nice.  Blocking most of the sun, I was able to sleep in some.  When I got up, I had my requisite coffee by the river. 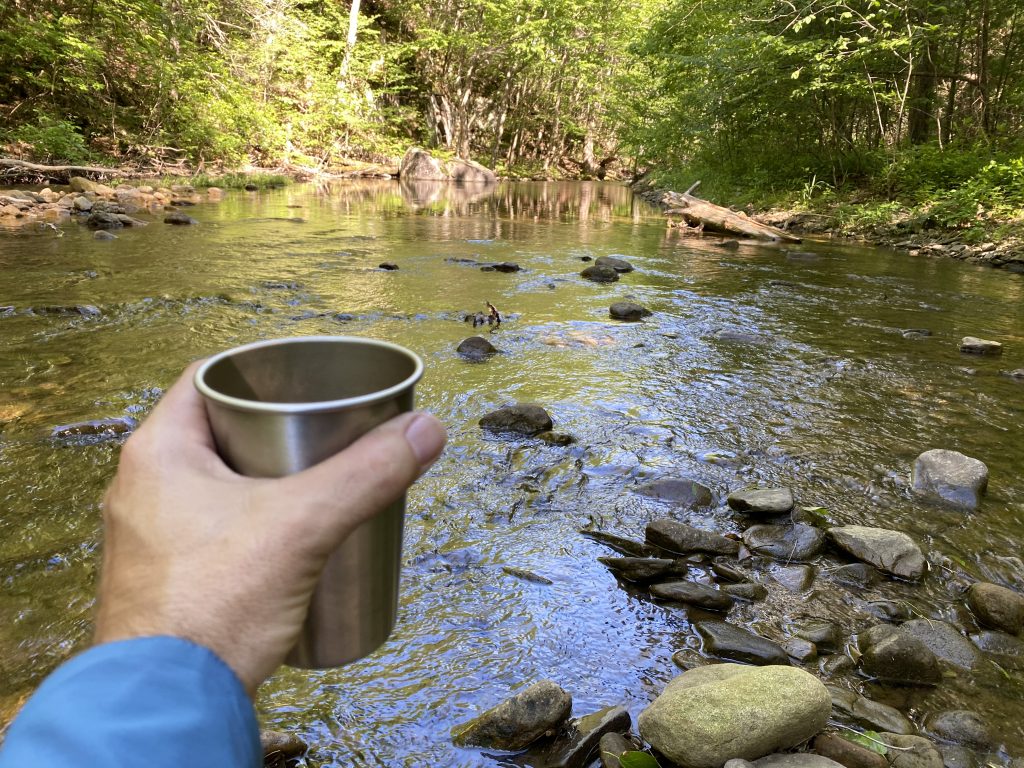 Mom had painted some rocks for me to hide on this trip.  I never thought to leave them at gas stations or rest stops, but I placed 3 at our primary trail stops, including this camp site. 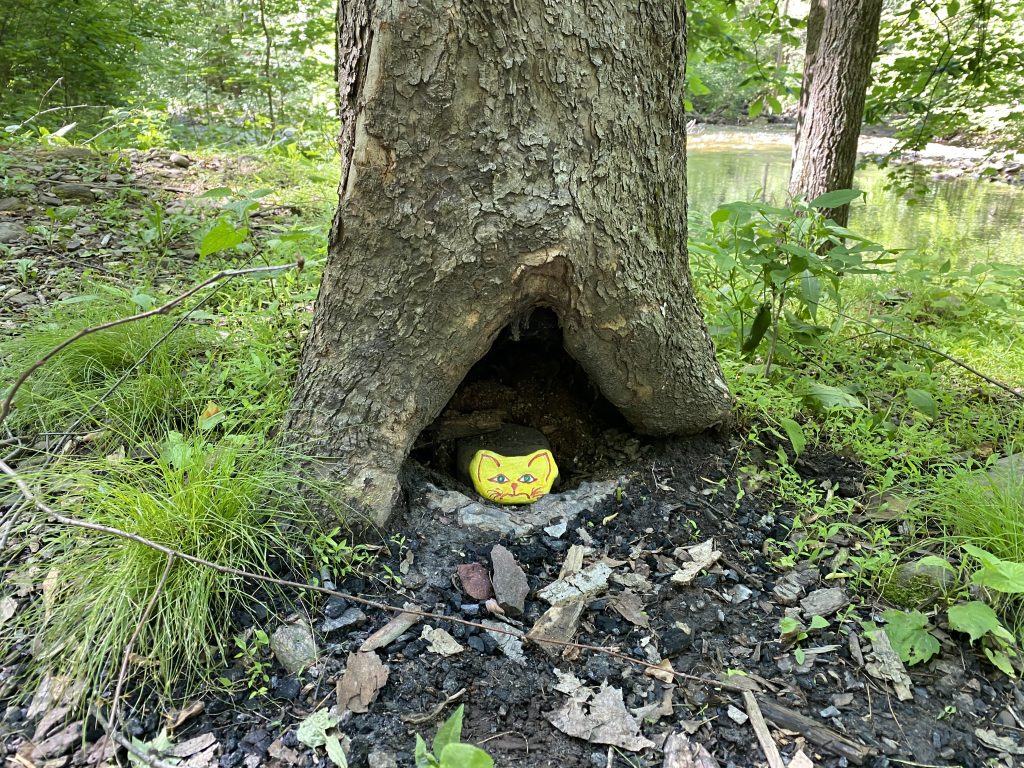 From there we packed up and rolled out to explore some sections of trail we hadn’t been down before.  Best decision ever!

The first new thing we found was a beautiful waterfall right next to an enticing camp site.  Out of everything on the trip, it was certainly the hardest thing to capture on camera.  The lighting, the scale, and the minimally-accessible area around it made it impossible to photograph for me, although this video turned out okay.

As we continued, we enjoyed a few water crossings, found a couple spots of mud that were deeper than what we’d have liked, and documented a couple additional camp sites we’d be happy to revisit.

The end of the trail was sudden and distinct.  Tall grass along the entirety of this trail suggested it was something seldom-traveled, but beyond these fallen trees, there was no sign of passage in months, if not years. 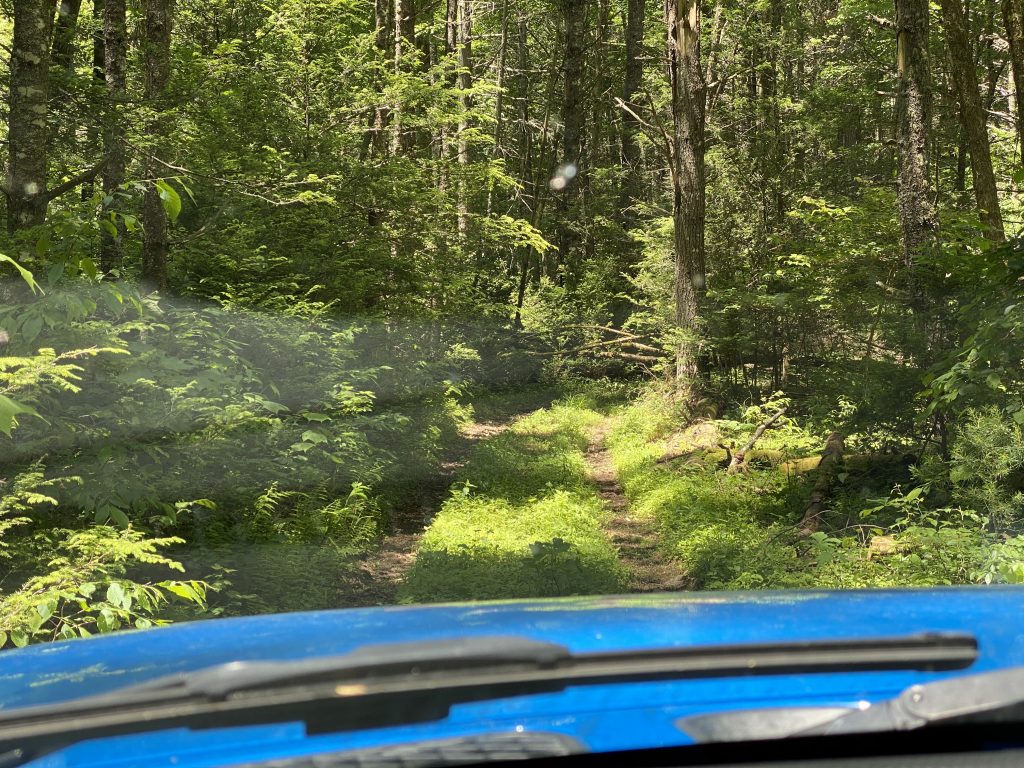 We backtracked from here to another dead end, finding a phenomenal site with a large pond, wide-open sky, and room for everyone we might possibly invite out for a future adventure.  There was no shade and little privacy, but sometimes a site like this is exactly what you need. 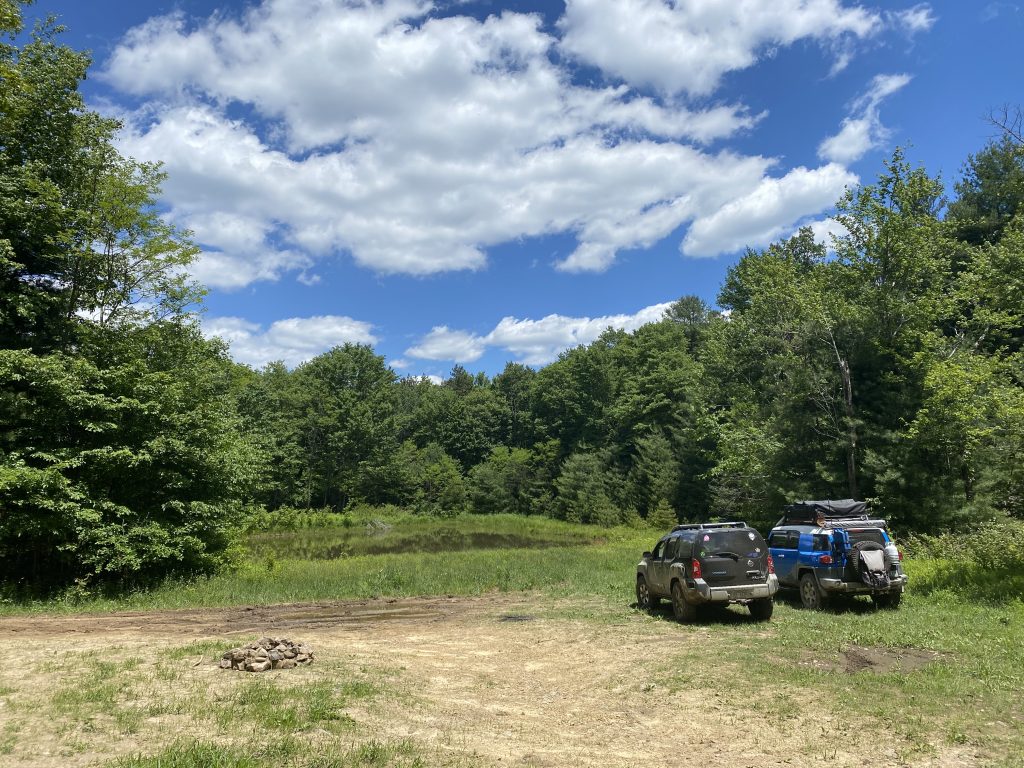 We wanted to continue along the trail, but by now we were well into the day.  Not wanting to find ourselves losing out on a decent site for the evening, we scouted availability.  We settled on a site that gave us fantastic river access, but didn’t offer much in the way of space or privacy.  We deposited Allen’s xTerra and drove for another hour or so,  running up to one of our favorite scenic spots, which offers a chance at cell service to check in with family, and an incredible view into West Virginia. 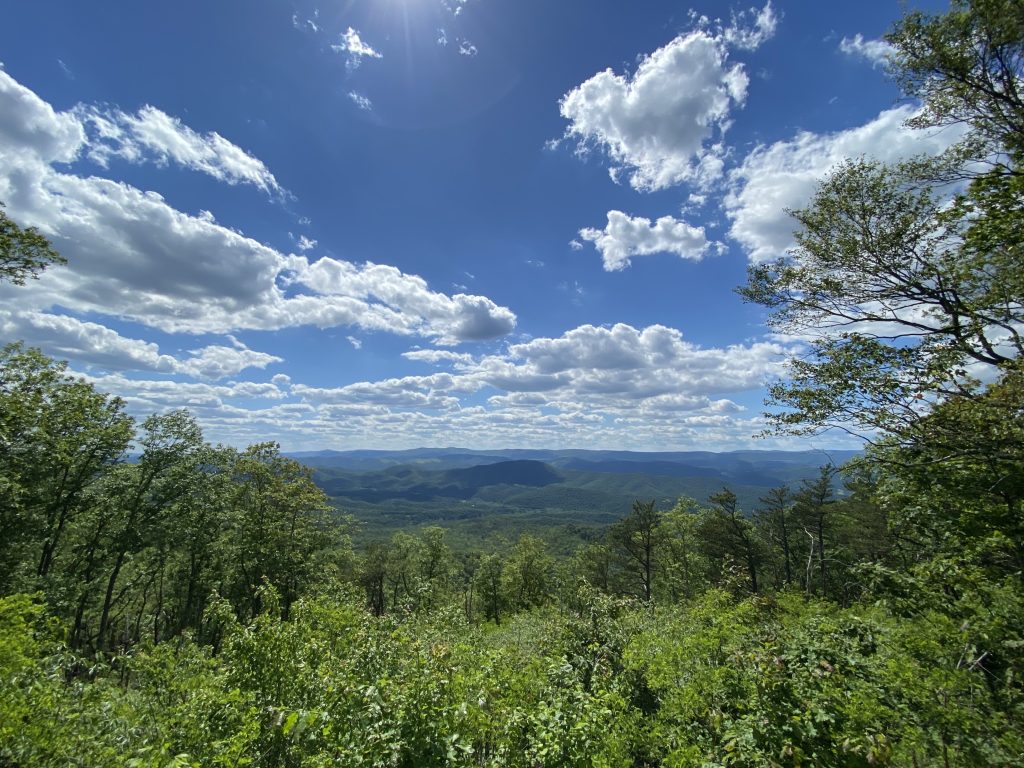 We returned to our camp site and “circled the wagons” as best we could to limit our visibility from the road.  We tasted the dust from every vehicle that passed by, maybe a dozen or so over the next couple days, but it was a cozy site with great access to the river.  Allen’s choice of location for his hammock couldn’t have been better! 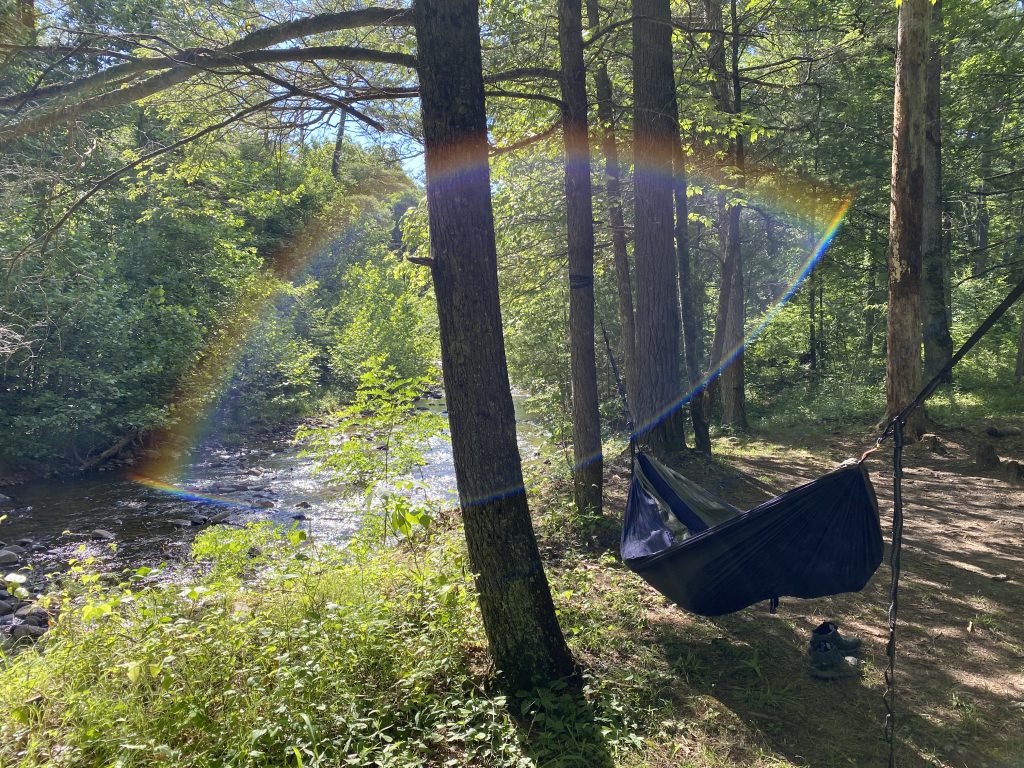 My spot wasn’t too bad, either. 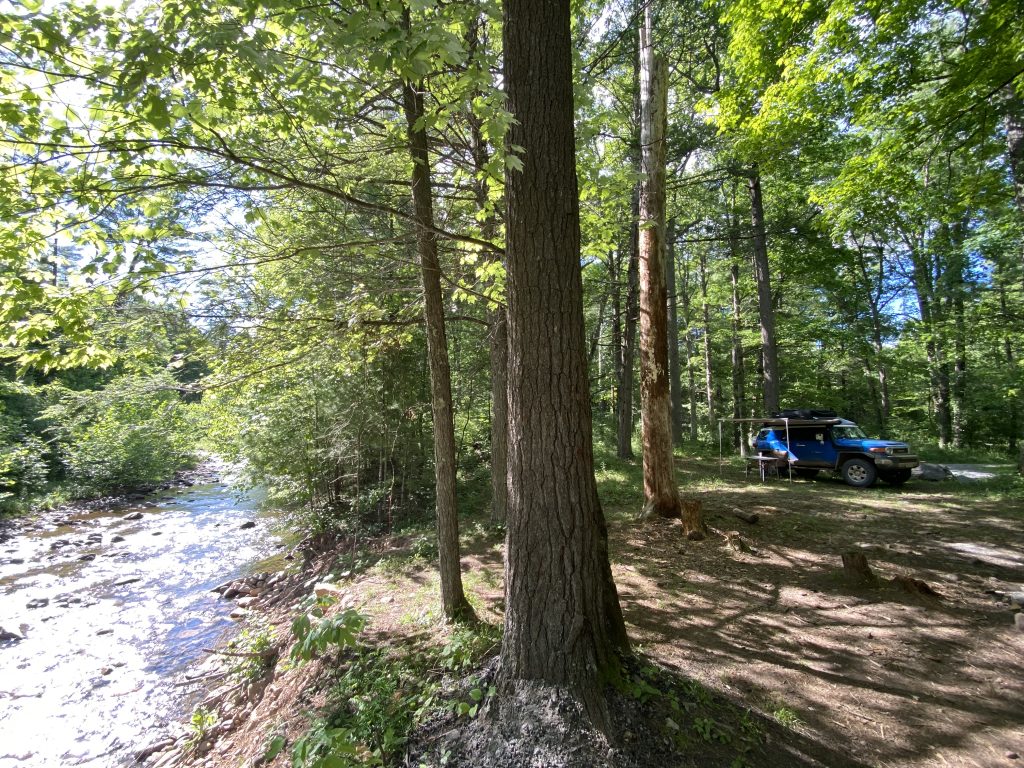 We settled in for some dinner, grilling up some burgers, and relaxing around a fire once the sun set.  It actually got down to 30° that night, but neither of us thought it ever felt that cold as we slept.  It was in the mid-50s by the time we woke up, so the morning was pleasant.  We ended up taking a short hike, just seeing what nature might decide to show us. 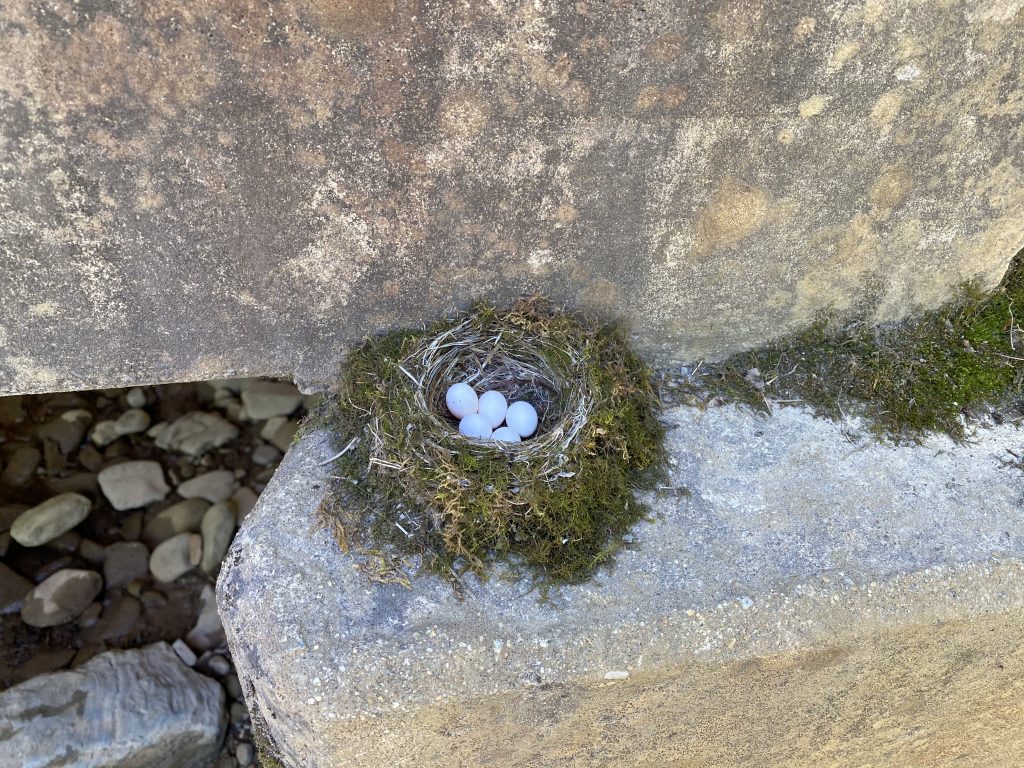 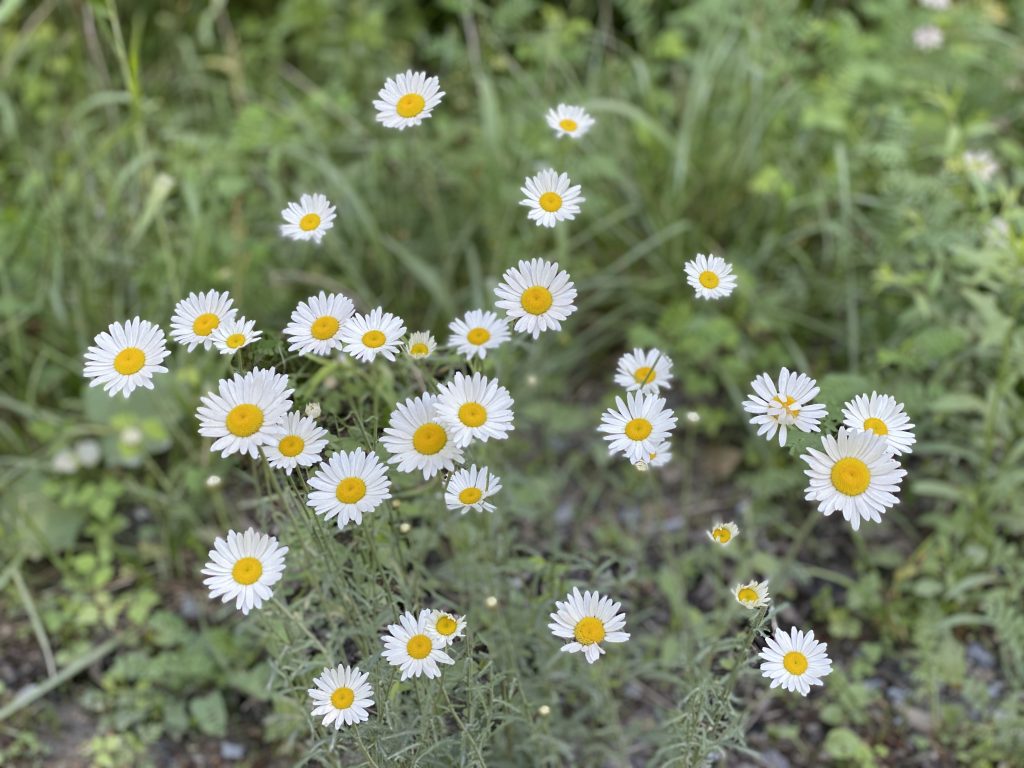 After returning to camp to clean up and lounge a bit, we hit the inReach for an updated forecast.  About the time it finally came in, so did the rain.  We made the call to air up and roll out a little ahead of schedule.  This let us get back home to some things we were each looking forward to, so it all worked out well.  Until next time, friends! 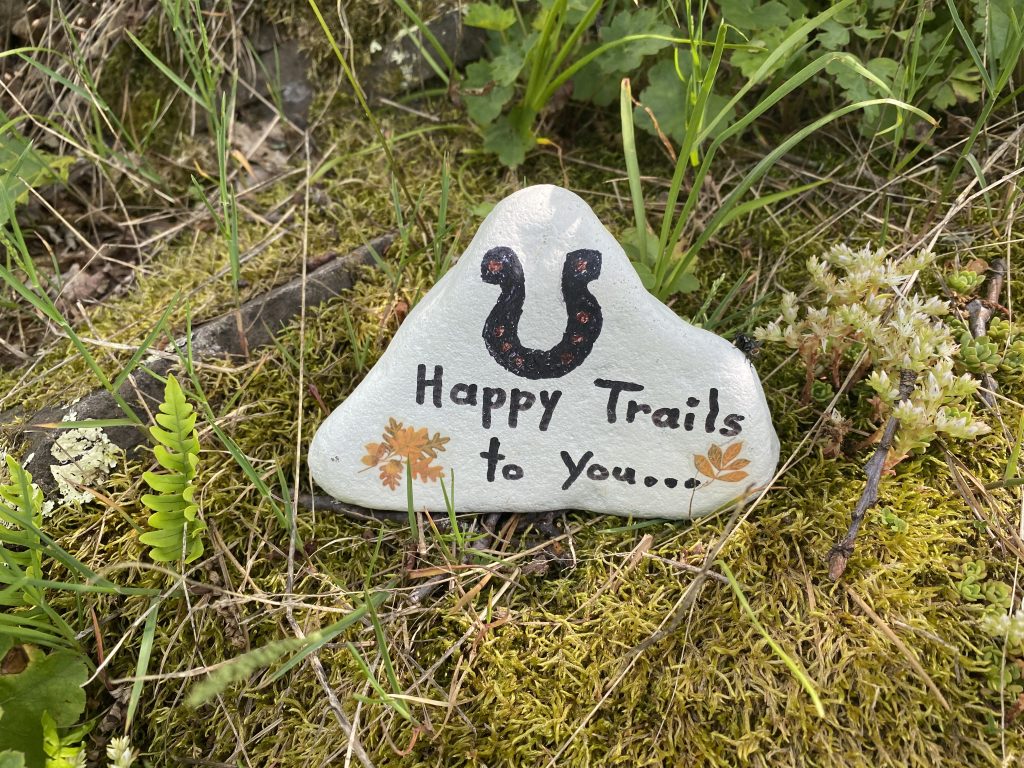